I know there are many kinds of noodles in the world. When someone asks me what my favorite is, I choose Japanese CHAMPON ちゃんぽん.
If you love eating ramen and haven't yet heard of or tried CHAMPON, you should try it while traveling in Japan.
I will give you a summary about it and recommend a restaurant to you below.

They use 100% domestically produced vegetables, flour of noodles and dumplings.
These ingredients are tasty and safe to eat.

Nagasaki Champon 長崎ちゃんぽん is a type of noodle food.

Champon ちゃんぽん
It looks like ramen and cooked by simmering together with the pork bone soup and so on, the noodles and a variety of ingredients such as vegetables, seafood and meat. (Some of the other champon restaurants use fried ingredients before simmering with the soup.)

The noodles of champon are thicker than usual ramen noodles.
Generally, ramen noodles are boiled with hot water. After boiling the noodles, a chef puts them into soup, and puts some ingredients on the ramen. The ingredients of ramen are just toppings. Champon is a different cooking style.

Champon is known as a regional food of Nagasaki 長崎 Prefecture in Kyushu 九州 area, but nowadays it is popular in various locations.

A Restautant RINGERHUT リンガーハット
They specializes in champon, and there are so many restaurants all over Japan.
All vegetables and flour of the noodle / dumplings (gyoza) are from 100% Japanese domestic products at RingerHut.

When you order Nagasaki Champon, you can choose the bowl size from regular and small size. Both size have different prices.
Regular Bowl 650 yen, Small Bowl 500 yen

If you order the regular bowl size, you can change the noodles to the large size.

Even if you change the noodles size, the vegetables quantity is the same: 255g, 0.56lb

There are a few tastes of champon such as standard taste, spicy taste, and seasonal special one.
The standard one called Nagasaki Champon.

In my opinion, the standard taste one is the most recommended dish of Ringerhut.
This restaurant's champon soup is similar to pork flavored ramen, and delicious!
There are some other restaurants that use salt soup instead of pork soup for their champon.

When I eat champon, I usually finish the champon soup because not only are noodles and toppings important but the soup is too for me to enjoy champon.

At RingerHut, when you are ordering champon you can ask for extra soup for free. It is off-menu but official.

I always order extra soup and drink up all. 🙂

* The extra soup system is available for these items below.

When you are really hungry, I recommend the Double Size Noodles of Nagasaki Champon with Extra Soup.
You order …

If you want a light meal you can order small one below.

The extra soup system is also available for Small Champon 小さいちゃんぽん. (Pictured above)

My favorite dishes of RINGERHUT

If you like spicy food, it would be a good idea to put some chili oil and pepper on the soup.

When you order Champon Heaped with Vegetables 820 yen
野菜たっぷりちゃんぽん Yasai-tappuri-champon,

it is served with 2 kinds of dressings.

This new noodles recipe features thick noodles topped with vegetables and ground meat, but does not have broth like other champon (or typical ramen) dishes. Instead, it is served with spicy Sichuan pepper oil and a bit of sauce at the bottom of the bowl. (Please mix it.)

When it first arrives at the table, I suggest tasting it without the spicy oil, so that you can initially enjoy the mild taste. Then try it with the spicy oil mixed it in. This way you'll be able to experience two different flavors in a single dish.

A disposable bib was kindly offered to me along with the dish, in order to prevent splashing any of the red sauce on my clothing.

This is not spaghetti.

Why don't you try super spicy ramen at another restaurant?

Dumplings and Stir Fried Rice
Putting Yuzu citron pepper (ゆずこしょう Yuzukoshou) on the dumplings is good taste.
* It is green paste in the photo above. When you order the dumplings it is served with this paste.

Their dumplings don't contain any garlic. This is good for people who mind the garlic smell. However, if you like garlic dumplings, maybe you are not satisfied with such a simple taste.

Another type of Saraudon is below.

Instead of the deep fried noodles, Futomen Saraudon 太めん皿うどん is used normal (thick and soft) champon noodles, and 255g of vegetables.

First, I eat saraudon without any sauces and seasonings.
Next, I ususally put vinegar on saraudon.
Then, I put a little bit saraudon sauce on it.

Two photos of wood ear mushrooms were not taken at RingerHut.

Reasonable set menu is also available during all business hours.

When you are ordering the set meal, please feel free to ask for a large serving of rice which is no extra charge.

You should order large size for free, because their large size of rice is smaller than usual regular size at some other restaurants.

This restaurant offers a tasty ice cream. It is a milk shake ice cream which has some of the tiny shaved ice mixed in.

I have eaten this a few times during my meals there. One of these times, I had the ice cream without ordering any food. I only stopped by this restaurant to eat the ice cream.

Tastes good! You should try it!

When you buy a noodle dish to go, the noodles and soup are packed separately as in the picture above.

The black bowl is microwave-safe, because the printed instructions on the bowl say that.

The instructions don't mention the white bowl. I guess it is not microwave-safe.

1 pack each of sauce and mustard was in the takeout bag. Because these were tiny little packs, I actually wanted a few packs of each!
I should have asked if I could get more.

The sale of these champon items below are ending.

Champon with Scallops and Asari Clams

When I had this there were 3 scallops and 11 Asari clams on it.

Spicy oil (Not too spicy)

A disposable apron was served together when I ordered this cold noodles.
It is good for women especially, who don't want their clothes to get dirty with the red oil.

Delicious, I will repeat this!
This was less spicy than real Thai style tom yam goong soup.
It was available from August 22, 2019 to maybe until September.

It was topped with 3 large shrimps.
You can see 2 kinds of chopped green leaves on the noodles, but they were not cilantro (coriander). There was no cilantro in it.
However, The restaurant's website said that this Tom Yum Goong soup was flavored with cilantro and lemongrass.
I wish the soup contained real cilantro because I like it.

* You should bring a towel if you sweat easily.

A lot of Wood Ear Mushrooms with Salt Soup Champon

I hope it is available around winter season.

To be honest, I prefer standard champon soup to this salt soup.

I recommend you order "standerd champon" and a topping "wood ear mushrooms" because you can choose the quantity of noodles for free.

Domestically Produced Wood Ear Mushrooms 100 yen
I heard that they stopped serving this additional topping. I hope they put it back on the menu. It was delicious. (Updated September 2019)

It was champon with starchy soup. It was priced amazingly lower than the restaurant's other noodle items.
The difference between this and the others was a lot more sprouts were used instead of other vegetables to save on the cost. Nevertheless, it was still rather tasty and I was satisfied after eating it.

This paste is Yuzu citron pepper (ゆずこしょう Yuzukoshou). Putting it in the soup is good taste.

You can buy champon online.

This website can be translated to English by automated translation service.

There are more than 600 branches in Japan.

Some restaurants are located around popular sightseeing areas in downtown Tokyo.

They ended this coupon.

After you you paid the bill and the waitress gives you a receipt which is printed with a coupon on the bottom.

When you use it next time, you can choose from 3 pieces of gyoza dumplings or a glass of non-alcoholic drink for free. 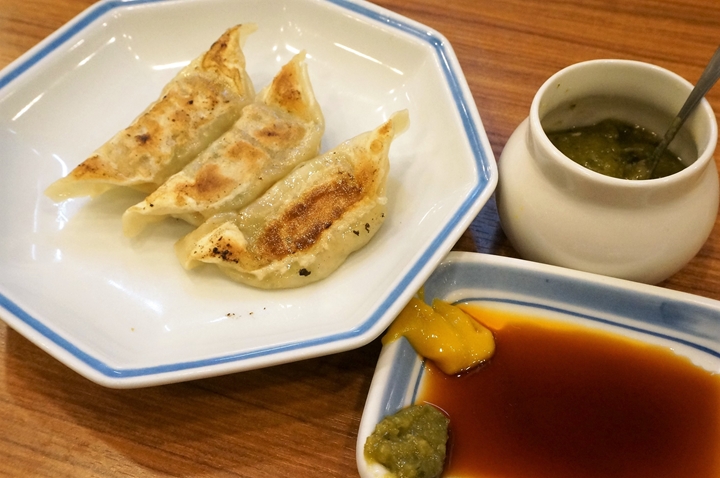 Before using it you need to answer an online questionnaire of this restaurant. When you finish all questions 4 digits code will be displayed on the website.
Write the code on the coupon.

This champon above that was offered at this restaurant in 2013. It was my favorite because it was cheaper and had higher quality ingredients. Unfortunately, they stopped using thick slices of squid and a large shrimp for it. I know, these days, seafood prices are getting expensive. Anyway, they still keep the quality of the tasty champon soup.

Check out another restaurant's champon!

Are also interested in ramen?
Check it out below!

I have often had food at a chain restaurant HIDAKAYA 日高屋.You can choose from a variety of reasonable foods such as rame...
February 10, 2019 January 13, 2022

I will rank the different kinds of mackerel sushi you can inexpensively get in and around Tokyo. This mackerel is usual...
May 3, 2019 March 23, 2021