In Japan, we often eat raw eggs, typically those of chicken or quail. Many types of dishes are served with raw egg or a half boiled egg.

10 eggs cost between 100 and 200 yen at supermarkets in Japan.
Brand chicken eggs are much more expensive though.

卵 means simply egg or biological word.
玉子 is for food. Usually, it has already cooked.

Raw whole egg or yolk only is often used as the ideal sauce for seafood, beef / pork bowls, noodles dishes, sukiyaki and many more.

In Japan, eggs are rigorously inspected and cleaned to ensure that they are fresh and safe to eat due to the fact that so many Japanese people eat raw eggs regularly, so there is no need to worry.

I have never heard of anyone getting sick after eating raw eggs here in Japan. However, I don't recommend eating eggs that are past their best-before / expiration date.

If you are not good at eating raw eggs, it is also a good idea to mix only the yolk of the raw egg without the egg white.

Some restaurants in Japan serve a raw egg with an "egg separator" as pictured below. 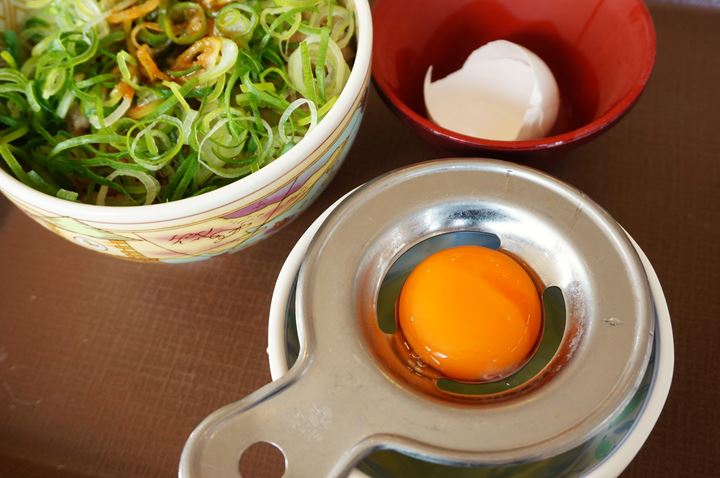 One of the most popular raw egg dishes is called Tamago-Kage-Gohan, or T.K.G.
It is rice mixed with beaten, raw egg and a dash of soy sauce.
Some people eat it with Nori (dried seaweed) or other toppings.

Why don't you try Tamago-Kake-Gohan?

A boiled egg cooked in a Japanese hot spring is also called Onsen-tamago.
It is not important for this hot spring eggs to boil soft or hard.

According to the cooking definition, a soft boiled egg is an egg with a set white and a running yolk. It's when the white is set, but the yolk is in a jelly-like state (about 7 minutes in boiling water then out into an ice bath).

You have probably seen that many ramen restaurants use this type of egg on their ramen. However, sometimes they also use seasoned hard boiled eggs.

Some international tourists whom I met said that their favorite Japanese food is Karaage.I wonder if fried chicken ...
January 15, 2019 December 19, 2020

I will rank the different kinds of mackerel sushi you can inexpensively get in and around Tokyo. This mackerel is usual...
May 3, 2019 March 23, 2021

This place is not a restaurant or a sightseeing place. It is a supermarket, and they completely specialize in selling m...
February 13, 2022 February 15, 2022
Solo Karaoke in a Spaceship Capsule at 1 KARA
MOTSU-NABE もつ鍋 is a Japanese hotpot that is local food of Hakata 博多 City Fukuoka 福岡 Precture Kyushu 九州 - A Restaurant HAKATA-GEKIJO 博多劇場